Dobui says DISMAC is monitoring the situation very closely but sees no need to make a call for a state of drought.  IS THIS MAN FOR REAL? HOW DID HE GET TO BE ON DISMAC?
“So far on the reports that we are receiving, we are quite far from that and until we eventually reach that situation than it will be necessary. But so far we are quite far from declaring anything just yet,” said Dobui. 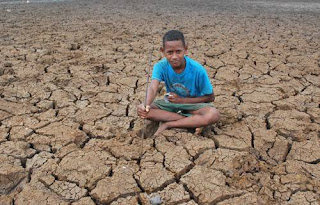 BUT WHAT IS THIS PICTURE SAYING DOBUI?

In the face of a drought

Dr Sushil K Sharma
Wednesday, September 15, 2010
He said that reports from the Nadi weather office indicated there will be long spells of dry weather until early December which meant people should use water wisely. LONG SPELLS OF DRY WEATHER. HMMM...WHAT DOES THAT MEAN? ONLY ONE THING...
A drought (or drouth [archaic]) is an extended period of months or years when a region notes a deficiency in its water supply. Generally, this occurs when a region receives consistently below average precipitation. It can have a substantial impact on the ecosystem and agriculture of the affected region. Although droughts can persist for several years, even a short, intense drought can cause significant damage[1] and harm the local economy.[2 (http://en.wikipedia.org/wiki/Drought)

IS IT THE HARM TO THE ALREADY DISASTROUS ECONOMY SINCE VOREQE'S COUP OF DEC. 5 2006 THAT THEY ARE WORRIED ABOUT?

“Especially for the critical areas in the western division we are requesting that people not water their gardens or wash their cars because of the critical situation the west is facing at this moment.” CRITICAL? DOESN'T THAT MEAN THE WEST IS EXPERIENCING A DROUGHT?
Water is being carted to affected areas in northern and western divisions as well as outer islands during this dry spell to help the people survive this drought. HUH! FIRST THEY SAY IT'S A DROUGHT BUT THEN IT ISN'T A DROUGHT? WHO ARE THEY KIDDING? JUST THEMSELVES BECAUSE IN THEIR OWN CONTRADICTIONS THEY ARE SHOWING THAT ALL THEY ARE DOING IS TRYING TO COVER UP FOR THE ILLEGALS WHO EMPLOY THEM WHILE DENYING THE REAL NATURAL SITUATION. WHAT A SHAME AND WASTE OF SPACE!Reporter: Sowani Koroi
Posted by Tears for Fiji at 9:23 PM